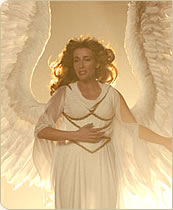 I met angels this week. Real angels in human form, sent to save me from falling into despair. I have met people akin to angels a few times before in my life but not until now have I actually felt I was in the presence of the divine.

First of all there was Jon – the paramedic who stayed on the phone with me as I was driving to the hospital; reassuring me all the way even when the battery light on my phone started blinking and he sounded like he was calling out to me through a windstorm. When I arrived at the hospital and thanked him for being with me, I thought the phone had finally cut out, but he was deciding whether or not to tell me it was his first day on the job. It made no difference, he had been there when I needed him – a freshly gilded angel.

Then there was Padmini, head cardiac nurse in the coronary care unit. I knelt before her like a beggar at the city gates, feeling it was almost too late to hope but she pulled me to my feet and said: “There is nothing to fear.” She had eyes like stars, they cast a light before her, soft as sunbeams on water; her fingers ministered, healed, turning tragedies into symphonies. A moment before I had been drowning but now I was on dry land. I was almost able to smile.

Then there was Il Professore, the head of cardiology. Gene Wilder in a white coat. He performed tricks with his stethoscope and told us jokes about how many cardiologists it took to change a lightbulb. He was as sure-footed as a gazelle traversing rocky terrain, his hands industrious as a potter turning a lump of clay into art to treasure forever.

When Alfie was moved from a private room into a ward with four other men, we met Alejandro. He came from Uruguay and told us wonderful tales of his homeland. The wide, open spaces, the oftentimes desolate landscape, the music, the people. Alejandro was ill himself but he spoke with such passion of a land he had left thirty years ago that we were transported, transformed into cattle farmers riding our beloved horses across dry tundra where the sun rises with hesitation and the clouds hang low as if dismembered.

Alejandro told us of the time he invited 130 people to dinner, feeding them two full sides of beef that took six hours to roast apiece with bread cooked on hot stones, all washed down with home-made red wine. He and his guests ate for hours then danced long into the night until the sky was streaked with purple and the ground was white with the pounding heels of the dancers.

Those people were sent to me. I am sure of it. In their presence serenity and hopefulness abounded. Fear dispersed. Light flowed, turning black minutes of desperation into flowers. I had prepared myself for nothing but grief but found instead angels, their arms open wide, recommending strength, climbing to the sky; real angels standing unafraid in the middle of the city.

7 thoughts on “A Gathering Of Angels”