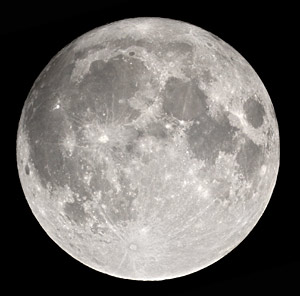 Right now the moon is full. It would be a beautiful orb of buffalo mozzarella but for one thing – the incessant glare of a naked lightbulb coating the trees and the grass and the rooftops with moondust. I feel myself slipping into something akin to lunacy when the full moon rises. Mistress Insomnia creaks the floorboards in the hallway at all hours, demanding yet another glass of water full of moonlight. Something urges me not to drink because the last thing anyone wants when the moon is full is to drink something containing moonlight. It is edgy as quicksilver, filling you up with restless thoughts and dreams without conclusions.

There is a glassiness to the light from a full moon. My hands shimmer in it, pale as a lady from yesteryear who always wore kid gloves. My face and hair become mystical, not my own. I feel separate from myself as if I belong somewhere else; it is a puzzling kind of sorcery.

Full Moon Fever exists. There is a website dedicated to it. Old books in the library, behind the reference section, mention lycanthropy, as in werewolves, as in howling at the moon. I want to see this phenomenon up close, armed with a silver bullet. Before the full moon rises I scoff that such a condition could exist but when the moon watches me from every room I feel like it is real, that the moon’s power includes transforming mere humans into creatures of light who howl in pleasure at their creator’s presence.

Scientists say we may have to go and live in outer space to survive as a species. I want to live on the moon so I can still see my beloved home planet. Maybe I can join the Moon Parliament and become the Watcher of the Tides of the Earth.

When I see the fullness of the Moon it seems so close, like I could clasp it in my hands without flinching if I were tall enough. And I wonder if there are moon creatures whom NASA or Stephen Hawking haven’t discovered, spending their nights watching us.

Moonglow spreads into the far reaches of the garden. Making it impossible for things already white or silver to hide. The mourning doves snuggling in the brushbox tree fidget, ruffling their feathers in displeasure. The possums squeal, spitting fruit onto the ground. Fruit bats fly haphazardly from tree to tree, sick from the silver light.

I close the curtains tightly, forcing them to stay together with clothespegs but the moonlight oozes through like batter leaking from a cake tin, through tiny slits at the base of the windows and under doors, glimmering at me, flowing surely as clockwork.

The moonlight is wordless, yet direct, stealing sleep, a villain throwing the world into a smelter from which we will all emerge translucent as children of the gods. My eyelids flutter as it plucks at my hours of rest with the fingers of someone playing a wicked trick. And then one bird sings, breaking the spell and the silver light is doused with gold. And the power of the full moon, for the moment, is gone.

13 thoughts on “I See A Full Moon Rising”