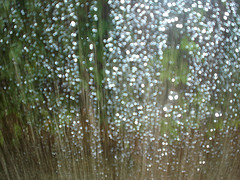 It has been Storm Central in Sydney over the past few days – severe electrical storms that made the lights go off and on, the phones zing, the windows shake and the doors swell with moisture. Some suburbs were unlucky enough to receive one month’s worth of rain in half an hour.

Chaos reigned as homes and roads were flooded, services cut. We joined in, playing musical buckets, as we have a leaking roof our landlord is taking her own sweet time to fix. *Sigh*

Everything is damp. Everything is gray. The rain is so thick against the windows they appear pixelated. There is so much water on the roads that I feel I am going to float downstream, a leaf searching for dry land.

Before the storm struck on Monday evening there was a calm, eerie, making me fold my arms across my chest instinctively. Jake and I were coming back from the shops. He took my hand as he did when he was little and said :’All the birds have gone. There are no people in the streets. It is like the end of the world.’

The clouds were rolling, every shade of black and gray imaginable. A wind came from the south, low enough for us to think it was beneath our feet, the first chill of autumn.

We made it indoors just before lightning shot from a clutch of clouds, the slam of the thunder like the closing of a dungeon door. Without delay, the sky was at war, crisp waves of energy vibrating against the earth. The rain fell, blowing spray, bellowing, making the house shudder.

After an hour the rain stopped. The sky cleared to white. A lone pigeon fluttered to the grass, grabbing worms and bugs, shaking raindrops from his wings. Jake and I stood, looking through the leaves of the jacaranda, trying to estimate how much rain had fallen.

And then we saw it. Incongruous, floating through the turbulent sky, a beacon, a silly joke sent by the gods – a green helium balloon with a trailing silver string, gliding easily as a gull over water, striding up and up and up as if bent on tackling the clouds. We made bets as to where it had come from, scanning the streets as if the culprit lurked close by. And then, once more, the rain came, and the balloon was gone.