One of the prompts from Cricket’s Slice Of Life this week is first apartment.

This prompt brought back so many memories.

I was 18 when I moved into my first apartment. Mel and I were first year University students, fresh from school, girls from the burbs, thrust head on into the colourful, lively, sometimes seedy world of Bondi. We lived on Bondi Rd, the street that leads down to perhaps one of Sydney’s most famous beaches – Bondi Beach – before Bondi became fashionable.

In those days Bondi was a town high on a thriving music and arts scene, high on the surf culture, high on life. We lived in a tiny two-bedder above Rosa’s Trattoria. As well as owning the restaurant Rosa – a beaming, motherly woman who taught us that there were more types of pasta than spaghetti and macaroni – owned our apartment. She insisted on giving us jobs as waitresses –

“So I can keep an eye on you. Your mothers will thank me.”

So we went to University during the day and worked at Rosa’s at night. Serving steaming plates of cannelloni, ravioli and gnocchi with spinach and bacon; and mountains of garlic bread. Dario, Rosa’s son fancied himself as a bit of a singer and every night he would regale the crowd with O Sole Mio and Santa Lucia. Mel and I have heard those songs so many times that we can still sing them word for word today. In perfect Italian.

Our apartment was tiny but very clean with a huge gas oven that was previously the main oven in the restaurant kitchen. It was temperamental – you had to jiggle the knobs before you turned it on – and it dwarfed the kitchen, but we loved it. Sometimes when Rosa had a rush on, she would commandeer it to make her secret pasta sauce, and we would come home from Uni to find four or five stainless steel pots bubbling on the stove.

The smell of tomatoes, oregano, basil and garlic permeated every room. Sometimes if you pressed your nose against the walls you could smell the lusciousness, the beautiful tang of the sauce.

Even in the avocado green bathroom that had cracked mirrors and rusty taps as a result of the salt spray from the beach, you could smell the deep, earthy tomato scent.

We didn’t have much money so Rosa’s brother, Guido, let us have a few items from his secondhand furniture store at cost. We got an enormous green couch that sunk in the middle, a coffee table decorated with shells and a bookcase that leaned so badly to the left we could only put books on one side of it or it fell over, for a hundred dollars.

We felt independent and fabulous, sneaking empty bottles of Chianti from Rosa’s bins and placing candles in them to save on electricity. We would drink cheap cider, dress entirely in black and pretend we were languishing in a Fellini film.

Bondi was different in those days. Unencumbered by prosperity. The shops were bustling, an eclectic mix of bookshops that actually sold poetry, the best shoe shop in Sydney (Doc Martens galore) and beachwear shops where everything was tie-dyed. For about six months I thought our neighbour, Dorina, had a fatal skin disease, until I realised her hands were stained permanently purple as a result of all the sarongs she tie-dyed.

The sea was the colour of Spanish glass. You could see it from every storefront. On a clear day it seemed to join up with the sky, touching everything with its glory. 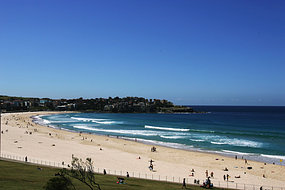 Bondi has changed so much. It is now the playground of the rich and famous. Two bedroom apartments like ours would now fetch over a million dollars. One of Australia’s richest men, James Packer, lives on the main drag facing the beach in a spectacular three storey apartment that in my day was a petrol station. There are Ferraris, Porsche Carreras and Lexus SUVs everywhere you look.

In my day I remember surfers balancing their boards on pushbikes and careening down Bondi Road. I could hear them in the mornings whooping with joy as the swell took them to shore. Now the surfers have custom-designed boards perched atop the latest Range Rovers. Bondi has lost its innocence, its village atmosphere at the hands of progress. Makes me think that sometimes progress is a dirty word.

Rosa’s Trattoria is gone, replaced by restaurant after restaurant serving nouvelle cuisine, but it will always hold a place in my heart. On special occasions Mel and I wheel out our favourite recipes – Bombolini di Pollo con Brodo (Chicken Balls in Broth) for Mel; and Gnocchi di Spinacce e Pancetta (Spinach and Pancetta Gnocchi,) for me, crack open a bottle of Chianti and reminisce.