I was pleasantly surprised to hear this.

However, if Barack Obama wants to keep his favourable Aussie approval rating he really needs to brush up on his Strine (Aussie slang).

I thought I would volunteer my services to educate him on the finer points of the Australian vernacular.

The first phrase he really needs to learn which will endear him even further to his Aussie fans is NO WORRIES.

No Worries is an expression of cheerful reassurance. It means Don’t Worry. The impact of this phrase is compounded when coupled with You’ll be right, mate! (everything will be OK, my friend). I actually think the words will slip quite easily off Senator Obama’s tongue, particularly when Bruce the Brickie asks him how the Wall Street Bailout will benefit Aussie shareholders – 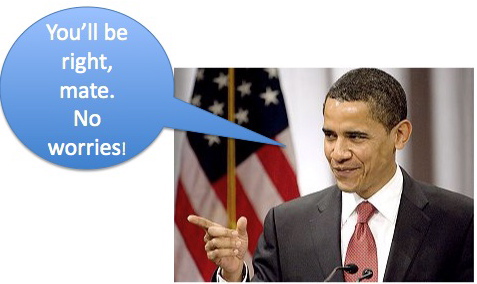 Then there is FAIR DINKUM which is used to emphasize that the point you have made is genuine, honest, true or truthful. Many people use the more modern abbreviated term: FAIR DINKS! 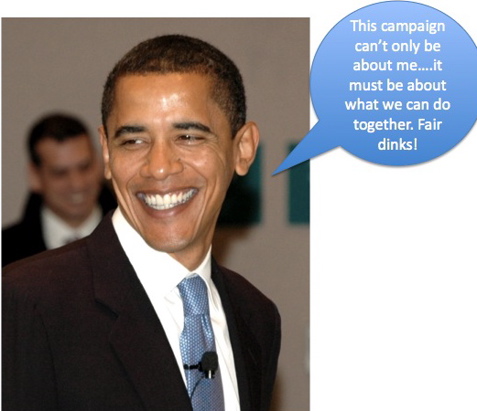 Finally, there is CHOICE. This is used to outline how fantastic, welcome or worthy something is. Many people say it after their first sip of beer on a hot summer’s day or if they’ve had a really good weekend. The correct pronunciation is to elongate the O and the I into a Y so it sounds like CHOYYYYYYYYYYYYYYYYYYCE!!! This is usually accompanied by a nod of the head. I think Senator Obama could pull it off quite well.

In all seriousness though, I wish Senator Obama all the best in the election on Tuesday. I will never forget when he said this. It inspires me every single day –

I hope that change comes…..