I have had to say goodbye to another of my beloved goldfish and it has hit me really hard. My lovely, gorgeous, little water sprite, Seb. I have had her for three and a half years and she has given me joy every single day. An elegant, pretty fish, she enjoyed music, eating aquatic plants and chatting (yes, fish do come up and chat to you. They are quite interactive…) 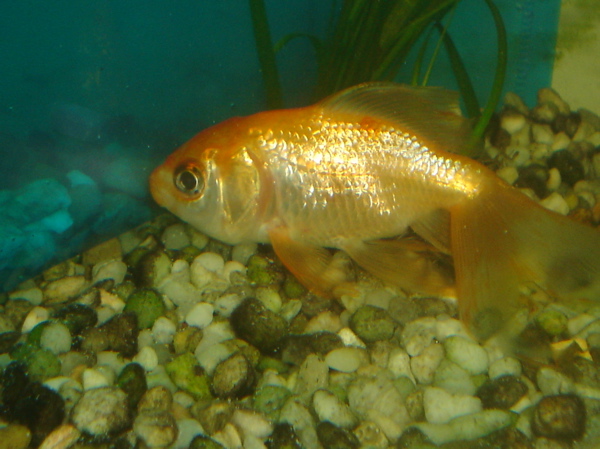 Seb had an illness that affected her gills and the amount of oxygen in her system. She showed initial symptoms of the disease three months ago and I treated her, even hand-feeding her for ten days. At that stage I thought she wasn’t going to make it but she made a complete recovery. However, last Thursday evening she began having difficulty breathing again so I gave her more medicine. She really didn’t seem too bad but by Friday afternoon she was gone. Just like that.

She looked at me with that cute little face she had and I could have sworn she smiled – and then she was gone. It’s hard to say goodbye to the little creatures in our care because they become such a significant part of our lives. I feel a connection with a lot of animals and have had a lot of animals which I still think about to this day. I think animals do make us better people. I think they get what life really is about and we should love them and respect them always.

Another thing that is hard when a pet passes away is the sense of responsibility we feel. We are the higher species, we call the shots, so it is hard not to blame ourselves when a little one in our care dies.

My Aunt Jo used to have an aviary on her patio. It was the most beautiful thing, hand carved wood made by a local artisan. It had lots of little perches and nesting boxes. She kept finches, birds which I often think are one step away from being fairy folk with their sweet little songs and movement fast as sunbeams.

Aunt Jo lives near bushland and there had been a lot of trouble with people dumping unwanted cats deep amongst the trees and gullies. Those cats that survived had no choice but to live completely on their wits. They became feral.

One night they got into the aviary. Somehow they managed to open the little door through which my aunt fed the birds. They killed every one. Fifteen sweet little fairy birds. Aunt Jo wakened in the middle of the night to the finches calling out in terror. She still weeps at the horror of it.

The sense of guilt and responsibility she felt as a result of losing the finches was overwhelming. I’ll never forget how low she was. For the past few days I have been feeling that way myself. Feeling sad, feeling guilty, missing my little one, wanting her back.

And then something happened.

I received this in the mail.

This is a fish finger puppet sent to me all the way from California by Melissa who has the wonderful blog Poet With A Day Job. She sent it to cheer me up after I lost my other little guy, Squirt, and to show her support for the work I did in preventing the school giving away goldfish as prizes at the fair.

I received it on a day when I was feeling so sad. It just cheered me up so much. We have decided to call her Seb in honour of our dear little friend.

There are days when the melancholy hits and it just won’t leave you.  And then from far across the sea, someone who is a real person living in this world like the rest of us, acts like a real angel and offers a balm to ease the pain.

It is incredible how one act of kindness can link, like fingers touching, to an act of grief and lessen its hold so that the sorrowful ones can breath again.

Thank you my dear friend, Melissa. I will treasure my little fishie……

26 thoughts on “From Across The Sea”