I felt like I was an extra in Woody Allen’s Scenes From A Mall today.

I was at the local shopping centre(mall) and was a victim, more than once, of mistaken identity.

Admittedly, my appearance was a little, er, festive. My son Nick bet me two weeks worth of emptying the dishwasher that I wouldn’t have the guts to wear a Santa hat in the Mall.

Now I don’t know about you, but I will do almost anything to get out of emptying the dishwasher, so I agreed. This was what I wore while shopping. 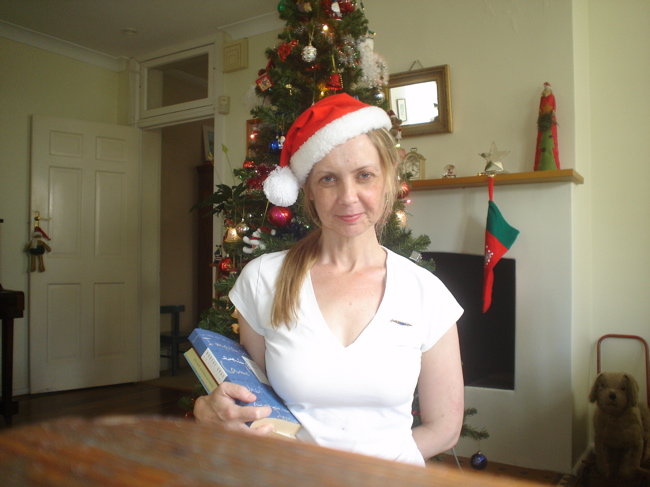 I was also wearing my Great Gran Min’s antique pin which I like to wear at this time of year to remember her by, because she loved Christmas so, but unfortunately, the pin looks a little bit like a name tag.

The first case of mistaken identity occurred in the bookshop. I was carrying a pile of books and a woman asked me if I could recommend some poetry for her niece. She began chatting away about how well her niece was doing in English at school and how much she loved poetry.

‘Um, I don’t work here, ‘ I managed to squeeze in. I don’t think she actually heard me, so intent was she on describing her niece’s bright future. She carried on so much I had no choice but to take her to the poetry section and hand her a Treasury of 18th century verse, some Auden and 100 years of female poets. The woman thanked me and headed for the cash registers.

I had two further instances of mistaken identity in K-Mart.

A Chinese lady who could barely speak English was holding a frying pan and sort of brandished it at me as if she was either about to hit me or sautè me.

‘How much?’ she asked though gritted teeth. ‘You tell me how much.’

‘You tell me how much,’ she shouted.

Luckily, the prices were easy to find in the frying pan aisle. I located the item in question.

The lady smiled, showing a row of uneven, chipped teeth.

I was in the gardening section looking for something for my Mum when I heard a couple mid-fight.

HE: your stomach looks really fat in those pants

SHE: it’s not my stomach, it’s the pants

HE: I think it’s your stomach

SHE: my boyfriend is an idiot. It’s the pants that make my stomach look big, isn’t it?

ME: Oh, absolutely. The pants are a strange cut around the stomach. That’s definitely what it is.

She returned to her boyfriend.

SHE: see, even the K-Mart Lady thinks you’re an idiot.

Looks like I’ve missed my calling. I should be working in Customer Service at the Mall.

20 thoughts on “That Christmas Feeling”