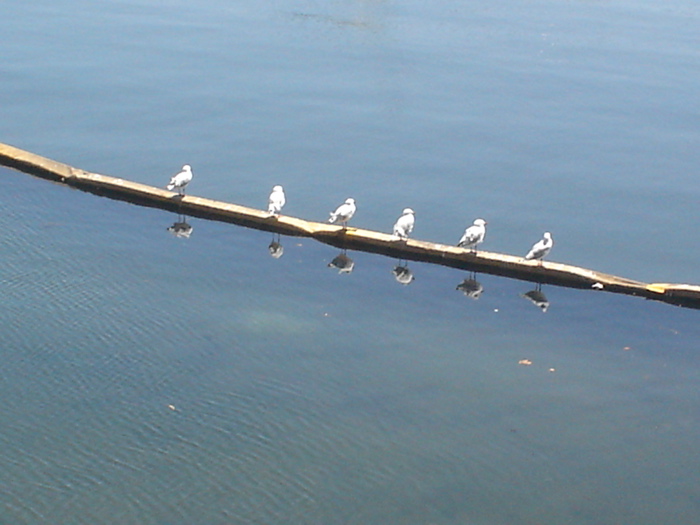 There are moments in life – spontaneous and unexpected –  that are completely joyful.

I was at the Sydney Fish Markets today and saw these seagulls perched on the stormwater net, waiting for their next feed. A little boy, aged about three, was standing on the grassy verge counting them as they landed. He was absolutely delighted to see them, chortling with glee as first one then another came along.

‘He’s never seen a seagull before,’ said his mother.

Turns out they were from the country, in western New South Wales, completely inland, miles and miles and miles from the sea. They have come to Sydney for a wedding. Tomorrow they are going to the beach where they hope to see crabs in the rockpools and maybe surfers.

One – the little boy counted as the first seagull arrived.

Two – he cried, jumping up and down on the spot.

Three, four – he exclaimed to anyone who cared to listen.

As the pure white birds landed with the accuracy of aircraft it struck me how what is commonplace to one can be extraordinary to another. Here I am in this city perched on the water looking at seagulls almost every day without a second thought. I would not usually look at one with much interest. I would certainly never count how many there were. I would in fact, assume that everyone whom I passed in the street would regard seagulls the same way I do, that they would have seen what are actually beautiful, skilled fishermen, hundreds of times before.

Five – the little boy was flapping his arms at his sides. Like wings.

We waited. A small crowd had gathered. Some other mothers with children. A few Japanese tourists.

‘That might be it,’ said the little boy’s mother. ‘No more seagulls. We should go now.’

We waited for five more minutes. I held my breath, sending wishes up to the sky for one more seagull.

And then it came.

Six – the little boy was full of joy. ‘Only five, then another one came along.’

‘Six seagulls sitting in the sun,’ said his mother.

The little boy clapped and cheered. The other children hopped and danced. The Japanese tourists took photos with their iPhones. I felt glad to have witnessed a regular part of my daily landscape being transformed into a rare and special event.

25 thoughts on “And Another One Came Along”