As twilight fell I saw a solitary bird perched on top of a telegraph post. He looked like he was painted there so still was he. The sky draped behind him in dark pink and periwinkle waves.

I wondered about him on his own. Was he experiencing loneliness? Or did he need some time out from the nattering of the flock? Maybe he wanted to drink in the remains of the day.

He knew the ways of the world, that bird. I could tell. He could throw together metaphors we humans haven’t even thought of yet.

Once, when the glory of flight went to his head he might even have attempted the secret quest of all birds – to fly amidst the stardust. He might even have got close to making it – soaring, ascending, transcending into the inky navy satin darkness; feeling like he was a god among birds, a veritable phoenix.

Inevitably, he would have been forced to descend to earth; taking comfort in the trees, the flowers, the nourishing seeds, the companionship of a warm wing. He would have skimmed the edges of sea and sky until his feathers absorbed the blue; a creature not just of the trees, but of the entire earth.

On this Earth Hour when the lights go out all over the world, that lone bird might poke his head out from under his wing in the maple tree he calls home and notice that the stars are glittering. Dreams might be rekindled. Hope might flare in his tiny heart that maybe these humans who can never understand his ethereal metaphors might be on the road to getting it right. 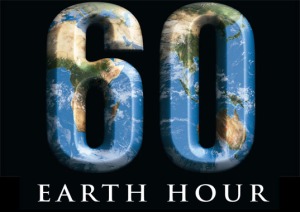 22 thoughts on “Just One Little Hour For Earth”