* Here’s a little story inspired by another of my search terms –under the bridge.

For those who don’t like such things, it is a little spooky… 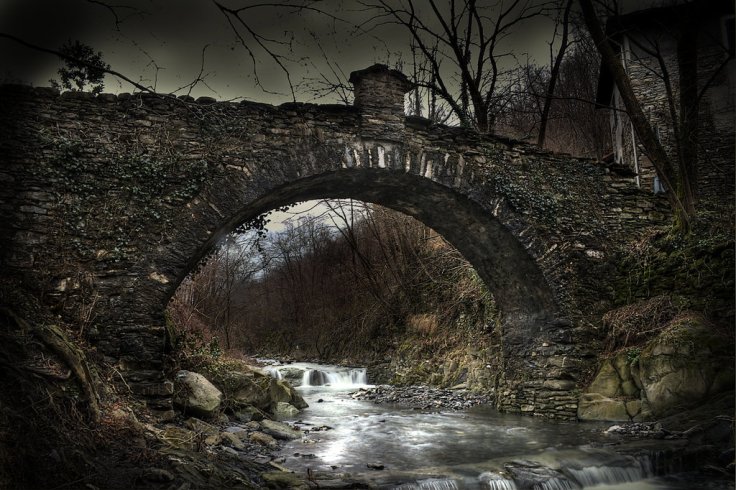 [Image by 19andrea87 at DeviantART]

It had been fine for a while. For the longest time Mina had been able to banish all thoughts of the girl from her mind. She could almost sleep right through the night now.

The memorial service had helped. It put an end to things in a way.

The girl had been called Harriet Hudson. 14 years old and dead in the water. Three old ladies in felt hats sat in the front pew of the church wiping their eyes with handkerchiefs edged with lace. Mina assumed they were grandmothers or aunts. She scanned the entire church, catching the eye of the mayor, the editor of The Daily News, the fisherman who found her; but she couldn’t see a father or a mother who had turned up to grieve for Harriet Hudson.

Joe Thompson, the editor, waylaid Mina after the service. He had been following her around for months, his reporter’s instinct on red alert after Mina had burst into tears at the inquest when the coroner had given the cause of death as misadventure. Or suicide.

Mina had seen Harriet on the bridge just before it happened. It was one of those nights that are so cold the air is translucent. The river shone like glass. The moon was crosshatched in shadow.

Harriet was holding a silver bracelet in her long, slender fingers, turning it this way and that. She was leaning on the side of the bridge. Her breath rose like smoke.

There was a sound below the bridge, a raw scraping as if someone had large metal hooks with which they were trying to latch on the bridge. Harriet dropped her bracelet into the water.

They were on her like birds of prey on meat. Two men, two creatures. Devils, Mina thought, even though she didn’t believe in such things. Their limbs were elongated, crouching. There were a series of hooked blades where their fingers should have been. They jingled like keys on a belt.

They grabbed Harriet, their bladed fingers slicing through the air, cutting Harriet’s face, her hair, her clothes. One of the blades plunged into her throat. She shuddered and fell over the bridge and into the water, as crumpled as old clothes.

Mina screamed. The creatures looked at her, smirking. She could see blood dripping from their blades. Harriet’s blood. They moved towards her and she ran faster than she had thought herself capable of, propelled by the certainty that they would kill her too if they could.

By the time she reached the police station Mina was hysterical. She fell through the door, shaking and crying, pleading. She couldn’t make sense of it, she couldn’t talk.

They took her to hospital, sedated her. She dreamed all night of blood and knives.

A fisherman found Harriet in the early morning, face down in the water. She was unscarred, untouched, not a cut on her. The police dismissed Mina’s talk of devils with knives, asking her if she’d been drinking.

Joe Thompson was not as dismissive. He watched Mina grow pale from lack of sleep, saw how jumpy she was. Every evening he followed her home as she took the long route. To avoid the bridge.

Despite the mayor’s office trying to jump on the rumours, an urban legend developed surrounding monsters on the bridge. People set up cameras, all night vigils, psychic detectives scoured the area for clues; they came up with nothing, missing the occasional sound of blade on stone amid the clamour.

After several months interest waned. The colour rose in Mina’s cheeks. Joe saw her laughing and chatting with friends. But she still avoided the bridge.

Mina was now sleeping soundly every night, but if she happened to wake she was fearful, imagining stone scraping on metal. There were nights where the wind rose, shaking the house, leaving her with a throbbing head.

After such a night she went out to bring in the morning paper and stumbled on something shiny on the front steps. It was a silver bracelet covered in reeds and river water.

For five days he had been standing on the bridge at night looking out to the water, listening to the river lap over the stones below. It was a peaceful sound.

To cross the bridge was Mina’s shortest way home. Joe wondered if she had grown tired of the alternate route forced upon her and had decided to plunge headlong into her fear.

He walked onto the bridge. The moon was narrowed to a cat’s eye. The river rushed away like children running to hide under the covers. The night was so still Joe could hear his footsteps falling like sledgehammers on dusty earth.

Nothing happened. Nothing. He crossed the bridge just as he always had. He kept going until he reached Mina’s house. The door was unlocked. The house was dark. It smelled damp and musty as if someone had been walking through every room with muddy boots.

Joe turned on the lights. The floors were covered in mud, twigs, reeds and water. The walls were gouged, lined deeply, as if heavy objects had been dragged along them.

Joe called out for Mina. There was no reply.

In every room it was the same. The mud, the detritus. No Mina.

Until he came to her bedroom. The rugs were swamps. Mina lay on the bed, river rocks crushing her chest, her sightless eyes turned to the dressing table where a silver bracelet lay.

There was an inscription.

Joe Thompson had the story he had wanted but he found his own tears joining the drag of water on the floors. He walked outside to a phone box down the street and anonymously called the police.

13 thoughts on “Under The Bridge”