In the lead up to Hallowe’en I’m going to try to fit in as many spooky stories as I can.

Here is the first one. 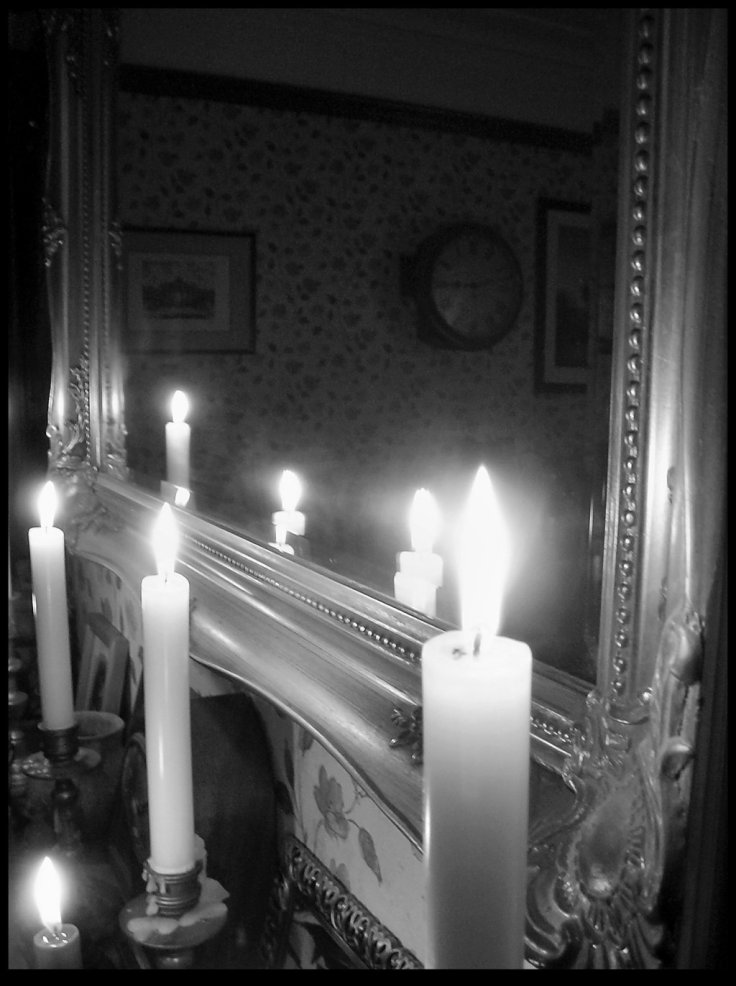 Blake was the most handsome man she had ever met. Sensitive, stylish and smart. He made her feel like she was the most beautiful woman in the world, the most desirable.

Every night when he came over to Stella’s tiny flat he brought champagne, roses, enormous candles made from the sweetest smelling beeswax, which he placed with a flourish in front of Stella’s gilt-edged mirror that hung above the mantel. Sometimes there were so many things in front of the mirror she had trouble catching sight of her reflection. And she wanted to catch sight of it because for the first time in years she looked vibrant. Alive.

She wanted to take Blake’s hand and stand with him in front of the mirror and say:’Look at us, look how happy we are,’ but Blake wouldn’t hear of it. ‘People who spend time looking in mirrors are vain,’ he said. ‘And vanity is a sin.’

They stayed in every night. Blake brought her dinner – fancy things like lobster and fillet mignon which he never ate, claiming he had eaten his fill at work. He was a chef. And a good one too if his food was anything to go by.

Stella ate while Blake read poetry – he was partial to Byron – and then they went to bed. Blake claimed their nights were full of passion but Stella couldn’t remember anything like passion, only a deep slumber full of the clamour of terrifying images of blood and devils and loss.

She fell asleep so quickly, so entirely that she wondered if Blake had drugged her, but she pushed the thought to the back of her mind. Such behaviour would make him some kind of brute and she couldn’t paint her one true love as some kind of monster. Could she?

Blake was never there in the morning. The candles had burned low and had left smoky trails on the mirror. It was discoloured and speckled. Blake’s side of the bed was cold, barely crumpled as if he had not slept there at all.

People at work had begun to comment on Stella’s appearance. How pale she was. How thin. They wondered about the scabs on her neck, like snake bites, that never completely healed.

Often she felt light-headed, nauseous. She thought that maybe it was the richness of the food Blake prepared, that she wasn’t getting enough fresh vegetables. Or that maybe she was just tired from all the nights of passion.

Then she read in the paper about a series of murders in her town, one in her very own street. Grisly, horrible. Young women drained of blood, paler than death, with snake bites on their necks.

People at work joked about vampires, said Stella might be next. Stella was late with the accounts, spending all afternoon feeling the scabs on her neck, wondering how they got there.

On the way home from work Stella stopped in at her church, asked Father O’Brien if she could have a vial of holy water and a crucifix, that she would explain later. He looked at her oddly, but obliged.

When Blake arrived Stella was standing on a chair, claiming she was changing the lightbulb above the bed. As she unscrewed the bulb she watched as Blake laid out the candles on the mantel. She looked directly into the mirror. She saw herself, stretching on the chair, but she didn’t see Blake.

She looked again as he lit the candles one by one. Their amber flames appeared in the mirror, gold around the edges, but no reflection of Blake appeared. According to the mirror he was not in the room.

Stella opened the vial of holy water, dabbed some on her fingertips, then touched Blake’s arm. He recoiled. Smoke rose. And the smell of burning.

‘What have you done?’ Blake was shouting at her, his eyes red, his teeth sharper, more prominent than she remembered.

‘Who are you? What are you?’ Stella raised the vial, shook several drops in Blake’s direction. They fell, thick as glass, landing on his cheeks, slashing through the skin like talons.

He ran towards her, teeth gnashing like a wild beast. She pulled out the crucifix  from deep in the pocket of her jeans, holding it in front of her. ‘Begone you ungodly thing. Go back to the dark place you came from.’

Blake let out a cry, the fangs of a snake filling his mouth, inscribed with red. Stella flicked more drops of the holy water and they landed in his mouth, making him writhe and moan. He tore at his mouth the way an animal does when it is caught in a snare then ran out of the room, sliding and falling down the stairs.

For hours afterwards Stella sat on the bed clutching the crucifix, waiting without breathing for the blessed sweep of morning sunlight. As the welcoming light cut through the shadows she was at last able to say the word she had known all along.