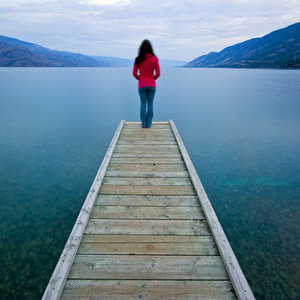 Agnes Booth is dead. My cousin, Jessie, rang me last night from Ireland with the news. There was a shaky tearfulness in her voice and a question she didn’t dare ask.

Agnes Booth lived in Jessie’s village. She was an odd, shrivelled little person who you could imagine listening at keyholes and opening other people’s mail if it happened to land in her postbox by mistake.

She had long, silver-black hair she tied up in a chignon. It was quite an elegant style for rural Ireland, and with her penchant for chic black ensembles from the London high street and sometimes from Paris (I know this because my Aunt Nelly was a fashion buyer in the 1970s for a London boutique), she set herself miles apart from her more dowdy village contemporaries.

It was incongruous, seeing her shuffling to the shops, her tiny frame swathed in black silk. She rustled as she walked.

It was inevitable, really, that the local kids began to regard Agnes as a witch. The black silk and constant rustling certainly didn’t help. Neither did the fact that she lived alone in a house with a huge gate at the end of the garden. The gate squeaked, worse than nails on a chalkboard whenever it opened, and some of the neighbourhood kids took to saying: ‘The witch is nigh. The witch is nigh’ whenever they heard the squeak.

For many years Jessie, my other cousin, Aine, my sister Shelley and I believed Agnes Booth was in fact a witch. This was highlighted by what she did to Jessie; something which I believe has impacted on her to this day. Something that challenged the beliefs of all of us.

I know it sounds unbelievable, the stuff of fantasy, but she did it.

Jessie loved flowers, daisies in particular. Her nimble little fingers couldn’t help but pick them when she saw them, forming them into daisy chains that she would hang around her neck or weave into her hair. Agnes had Black-eyed Susans in her garden. I made a joke about them, saying they were children Agnes had turned into flowers, their eyes turned black with sorrow, warning Jessie not to pick them. I had seen Agnes out in the garden in the mornings, crooning to the Susans, as we called them. I could see how much she loved them and feared that if Jessie picked them there would be hell to pay.

A few days later as we were playing dress-ups in the garden, Jessie finished off her old bedsheet doubling as a Roman toga with a new necklace she had made. From Agnes Booth’s Susans. She had sneaked into the garden earlier that morning and picked a handful. What we didn’t know at the time was that in her haste to pick the Susans she had pulled several of the plants out by the roots and trampled a few others.

It wasn’t long before Agnes found out. She stormed into the garden. How she knew it was Jessie who picked the flowers, I will never know, but she knew and she was angry about it.

You hateful child, she shouted. You nasty, thieving little madam. You picked my flowers, the ones I love best.

You can imagine how shocked we all were. Our ages ranged from 8 to 12. We were highly imaginative and quite superstitious. I remember clutching my chest after Agnes Booth rustled off, convinced I was having a heart attack from the shock. Shelley and Aine were crying, but it was Jessie who was the most affected. She was so pale and still I thought she had died where she stood.

Jessie believed she’d been cursed. We all did. But what the curse actually meant, we weren’t sure. ‘Is Jessie going to die?’ Shelley asked. ‘No, of course not, ‘ I replied. But as the cool afternoon breeze swept up from the Atlantic a sense of foreboding grew in me that stayed there for several days.

Some curses are famous. The Kennedys were supposed to be cursed.

The list goes on and on. These people experienced misfortune and a great deal of tragedy in their lives, but does that mean they were cursed?

Jessie is in her forties now. She has never been married. Has no children. She was almost married several times but the grooms to be either got cold feet or the relationships fell apart. She lost her brother a few years ago and a while back she was working overseas and her tenants burned her house down.

Despite this, I believe Jessie has had a good life. She is a highly respected doctor and has worked all over the world for the Red Cross and similar organisations. She has a beautiful new home and is quite well off. She has always seemed busy and fulfilled.

I was surprised to hear that she sometimes blamed any perceived bad luck on Agnes Booth and that more than thirty years later at the back of her mind she still wonders if she’s cursed.

After chatting for more than an hour Jessie still hadn’t asked me the question I know she wanted to ask. So I answered it anyway.

The curse will be broken now, I said. Now that she’s gone.

16 thoughts on “Breaking The Curse”