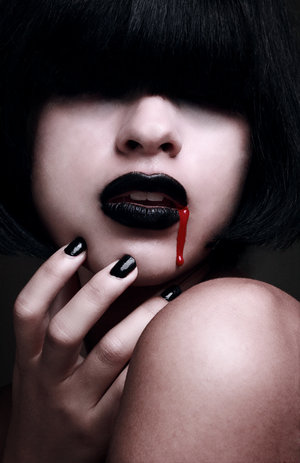 The rain beat against the window of the bar. Drops of grey water slid unbroken down the glass collecting in pools on the greasy window sills. A tiny black spider huddled under the eaves, using its web as a raincoat. Janice was surprised she didn’t even shudder at the sight of its gangly legs, instead she nodded, acknowledging the spider’s ingenuity.

Someone was playing a tune on the juke box. A song about love. Wasn’t every song these days about love? The pain, the weeping, the broken, twisted hearts. Where were the happy songs about love?

The guy at the table next to her came back with a jug of beer. As he moved his chair out to sit down a black spider edged against the wainscotting. The guy asked Janice if she’d like to join him and his two friends, a man and a woman who couldn’t keep their hands off each other.

Sure, Janice said. Why not? But I don’t feel like a beer. I’m going to get a Hallowe’en cocktail.

The cocktails were served in silver goblets. It was a thick, treacly mixture.

It’s a Black Widow, said the bartender. Out of the corner of her eye Janice saw a series of black spiders crawling among the mixers at the back of the bar.

The drink was sweet, but also peppery and musty as if the goblets hadn’t been cleaned of dust before the drinks were poured.

Janice drank deeply, feeling a flush rising from her toes. She saw black spiders scampering around her feet.

The guy with the jug of beer had drunk most of the jug himself by the time she returned to the table. His friends had disappeared, probably to a hotel room or the back of their car.

The lights in the bar were flickering. The ceiling was speckled, stained. Janice could have sworn it was covered in hundreds of spiders. Her heart was pounding. She felt insignificant and omnipotent at the same time. She was incredibly hungry.

The jug of beer guy said he had a room nearby, asked her if she’d like to join him there. She didn’t hesitate, nibbling on his ear as they walked along the inky wet streets. Spiders hung from the streetlights, their webs thickly spattered with rain.

The jug of beer guy’s room was plain, barely furnished. But his bed was enormous. Janice thought of the glutinous cocktail she had relished, her throat still warm from it, and threw the guy on the bed.

She ripped off his clothes, pinning him to the bed as if she had more than two arms. He moaned in delight. Their lovemaking was passionate, intense. Janice had never been so dominant, so in control. The jug of beer guy’s eyes were rolling back in his head as if he had reached a point of rapture.

Janice was suddenly repulsed by him. By his stupid little masculine wants and needs. How easy men were to please, to manipulate.

The hunger that had begun to plague her in the bar grew. She became aware of jug of beer guy’s quickly beating heart. She imagined the rich, treacly, peppery taste of it.

She plunged her teeth, sharp as daggers, into jug of beer guy’s chest, ripping out his heart and eating it whole. He died before he could scream.

The blood filled her head like power, like the sun. She was everything, she was nothing. She was merciless.

Janice wiped herself clean and walked out into the streets still glimmering with rain. Thousands of tiny black spiders ran from her, scuttling in the shadows.