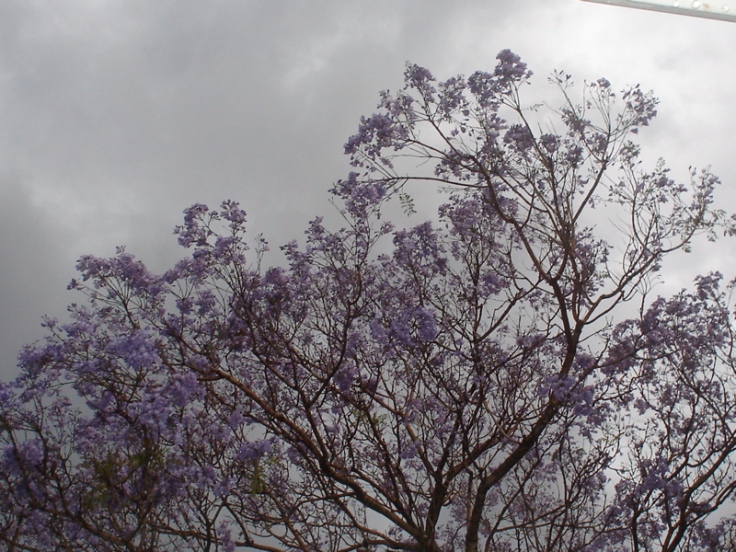 I feel like I’m in an action movie where I’m trapped in a room and the evil genius who is after me has a device that is making the walls close in. Inch by inch.

My next door neighbours, to the right of me, to the left of me, have complained about the jacaranda tree in my garden. At this time of year jacarandas drop their bell-shaped lavender blossoms that actually look like little fairy bonnets all over the ground. They fall and they fall until the ground is carpeted in purple.

The drop of the thousand blossoms lasts for about a month. I will admit that it can be a bit of a hassle, particularly if it rains because the blossoms make the ground very slippery, but it is still a joy to see all that purple in the garden.

My neighbours don’t think so. They have complained to me and my landlord about the tree. They are tired of sweeping up the blossoms. They feel they shouldn’t have to do it as it wasn’t their choice that the tree be planted there in the first place. The thing is that neither of them were there when the tree was planted because it’s at least forty years old.

I have encountered some petty nonsense in my time but this really takes the cake. The jacaranda is about six or seven metres tall. Its branches spread about ten metres. None of them hang directly over either of my neighbour’s gardens. It is the wind that carries the blossoms over the fences. How can I or my landlord control which way the wind blows?

My landlord, uncharacteristically, told my neighbours to get stuffed and to keep sweeping.

I stood in the garden at twilight when the sky was purple white and the jacaranda was purple dark and the grass that was free of blossoms was covered instead in shadows. Old, old shadows.

That the next day would bring wind.

30 thoughts on “Love Thy Neighbour”