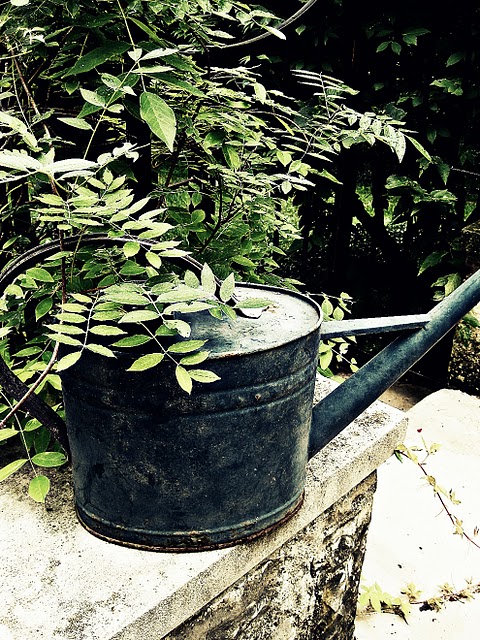 Here is the prompt for this week’s Magpie Tales.

This is my story….

The garden wall was almost hidden by blue hydrangeas, the delicate climbing Angel Face roses and the maidenhair ferns Esther had called fairy shawls. It was overgrown but vibrant. Foxgloves, snapdragons and larkspur ambled around the brickwork, a lavish adornment.

Jon had to watch his mother every time she came over. He knew she had her garden shears in that shopping bag she always carried.

You can’t cut any of it away, he said, his voice rising in pitch and cracking a little with pain. It’s all I have left of her.

She’s gone, Jon. His mother’s voice, discordant as a rusty nail down glass, made him wince. It’s time you accepted it and moved on.

His mother didn’t understand. She would bulldoze down every memory he had of her if she could.

He saw her at night. Watering the garden with the old tin watering can she found by the side of the road. Horrified that someone had just thrown it away, she brought it home, giving it pride of place in her favourite spot by the stone wall.

That old watering can, timeworn and discoloured, watered hundreds of flowers. It brought colour and moss and magic to a garden tangled up in green.

No matter what I water with it, it grows, she said.

Jon liked to watch her in the garden, tending the plants like they were her children. She spoke to them, a caress, a whisper, and even though Jon knew it was really the wind, they seemed to bend to her in response.

When the dark days came, when the fear and sorrow ate into his soul so deeply he couldn’t tell if it was death or just silence that had descended; Esther could no longer go out into the garden.

He placed her bed by the window so she could see the Angel Face roses turn from pink to lilac, hiding in the kitchen so she wouldn’t see him cry after watching her watch the garden like a bird in a cage looking at the sky.

I hate you, he scrawled on scraps of paper. Crumpling them up and throwing them out into the street. Hoping that whoever found them would know what he meant, would share his hatred of this life, this time, this place that took everything good away.

Water my babies, she had said right up to the end. Don’t let them thirst.

He glimpsed her sometimes. Tawny gold, resting at the edge of shadows, leaving a bright spot like wattle dusting the ground.

He saw Esther properly for the first time at twilight. Vulnerable as a nightbird not quite used to the dark, but radiant, outlined in light.

She stayed briefly, holding her arms out to the garden, an embrace like clear water running.

Jon remembered that he needed to water the garden.

He tried to use the watering can. It was heavy, unwieldy. The spout leaked greeny- brown water all over his hands. He left it on the wall, full of water, overnight.

In the morning the watering can was empty. The foxgloves stood alert, refreshed. Purple, yellow and white stately bells ready to peal.

Jon examined the base of it. The sides. But there was no evidence of holes.

Every morning it was empty.

And the garden continued to flourish.

A dream not quite ready to end.

And he heard the murmur of the whispers she had left amongst the leaves, in the midst of petals emerging like butterfly wings.

And he knew she would never leave him.

Fine as the break of day.

20 thoughts on “The Garden Wall”