There are certain things I miss quite a lot.

One of them is the decline of the iconic Aussie Corner Shop.

You used to find at least a good half dozen of them in every suburb, perched on street corners, selling everything from newspapers to piping hot Big Ben meat pies.

In those days there were two types of sauce in enormous squeeze bottles kept on the counter. Tomato and Barbecue. You could squeeze as much as you wanted onto your pie and no one batted an eyelid. If the shopkeeper wasn’t looking you could do the combo squeeze where both flavours of sauce were squirted and combined. A pie eater’s dream. 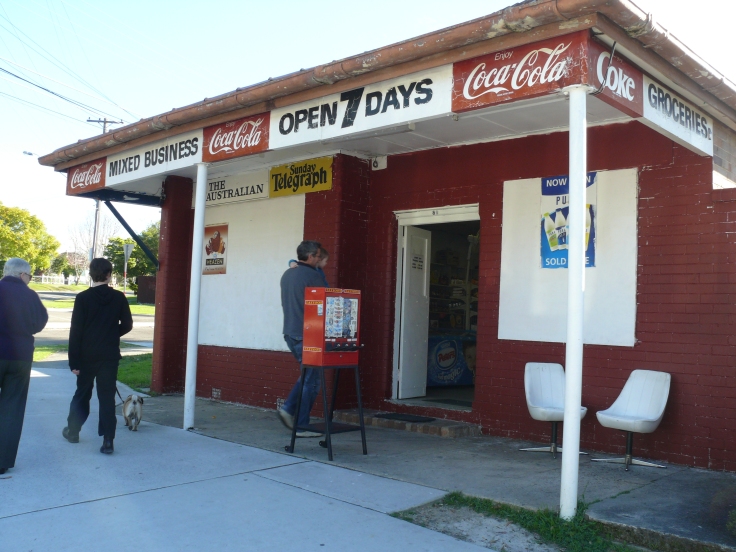 You can still find them in the suburbs. (This one is near my sister’s place and the boy in black walking the dog is Nick.)

The ones in the inner city look more like this.

Full of plants and flowers and gluten free crackers.

When I was a kid I used to spend my weekly pocket money of 30 cents on mixed lollies (Aussie for sweets or candy) and a chocolate or banana paddle pop.

It was the most wonderful feeling in the world to wake up on Sunday morning knowing that I was in for some treats.

When I was a kid the corner shops looked more like this.

Sadly, those days are long gone.

But I will never forget the feeling of anticipation on a Sunday morning and walking into the cool interior of the shop, the ceiling fans whirring, the smell of fresh newsprint, strawberry bubblegum and the earthy, invigorating scent of potatoes just picked held in baskets under the counter.

People were sitting at the formica tables at the back drinking milkshakes in the stainless steel tumblers they were mixed in with bendy paper straws striped red and white. The milk was so cold they got a pain in their foreheads and had to stop glugging half way through even though they didn’t want to stop because the milkshake was so delicious.

Kids fought over jaffas, fantails and pineapple chunks. I refused to share my spearmint leaves or my ripe raspberries. I ate my Golden Rough before anyone could even blink.

And the Paddle Pop. Luscious, creamy and cool. The most delightful ice block of them all. A combination of chocolate mousse and mudcake on a stick. The banana one was out of this world, almost transporting you to a permanent state of euphoria.

The corner shops might be boarded up and fading away but the memories remain.

They can’t take that away from me.