Its_Death Steve Death
I notice that the humans who say “money isn’t important” are the ones who have an awful lot of it.

I know a few people like that. They languish, nibbling on an organic, gluten free, low fat cookie while sipping freshly pressed cumquat juice (incidentally, the press is made by the same guys who make Lamborghinis…..) while pontificating about the world. Can you pontificate and languish at the same time? Hmmmm. Maybe not.

They have opinions about everything.

Climate change? It’s been going on for millenia. Homeless people ? They should just shut up and find a job. Endangered animals? There’s too many of them anyway. Deforestation? If we cut down more trees we can build more houses. What goes around comes around? Never heard of it. The unequal distribution of wealth in the world? Doesn’t exist. Money isn’t important, dahling. Don’t you know anything?

Money isn’t important, they say, clutching their Birkin bag as if it was the holy grail.

There used to be a lot of people I avidly disliked. I used to let them get to me more than was healthy for my mindset. I prayed and prayed that karma would get them and that the universe would slap them in the face for their negative behaviour.But sometimes karma is a long time coming. I learned that waiting for it to happen. I also learned that it is not up to me who gets slapped in the face by karma. No matter how much I want it or wish it. That is up to the gods alone.

There’s another thing about karma. It can seem instant. You do something bad and BANG – instant payback. I’m not sure it really exists in its instant form, rather I think what happens is that you have an almost nine lives scenario when it comes to karma. You do something bad, you’re given another chance. You do another bad thing, another chance. But then you use up your quota and BAM. The karma comes along. And it seems instant.

I saw a woman yesterday whose son used to go to primary school with my son. She was a bitch to me for seven years. Truth be told, she was a bitch to most people. Her husband was a banker and earned gazillions of dollars a year and they lived in a big, fancy house with 5 bedrooms and a double garage and a pool and the all important northerly aspect.

Once, we were doing a fundraising thing for the school and I had to go to her house. I think she mistook the stunned look on my face as I stood in the hallway (she called it a foyer, pronounced foy-ay,) for being overwhelmed and overimpressed when in fact I was trying not to gag over the ostentatious interior design. There was gold leaf coated and french washed furniture everywhere. A white room. A red room. A super duper yellow room. I was actually trying not to laugh because as soon as I walked in I thought of something I heard Joan Rivers say once: “All that money and she still looks cheap.”

‘Bet you thought you’d never be in a house like this,’ she said, which of course, was meant to make me feel inferior but instead made me want to laugh even more. ‘It’s not that important to me but I don’t mind it.’

Pull the other one, it plays Jingle Bells, I thought.

I was in the newsagent’s yesterday and that woman was there. Trying to buy a protractor for her kid’s maths class. The protractor cost $1.40.

The woman wanted to put the cost of the protractor on her credit card. Now you may not know this but the banks hit the retailers with a number of fees whenever a credit card is used. It can be as much as 3% of the purchase price. That is why many shops have signs like : No credit cards for purchases under $15. It is just not cost effective for a shopkeeper to accept a credit card for less because the fees he is hit with actually mean he makes no profit on the item and sometimes doesn’t even recover his costs.

So he refused to let her use the card. And she had a conniption. A good, old-fashioned pass-the-smelling-salts-I-need-a-sip-of-brandy-to-calm-my-nerves conniption. Over $1.40.

I was going to get involved and tell her to get off her motherfreaking high horse and calm down when I saw the signs. She was still well-dressed but her dark roots were showing in her usually perfectly coiffed hair. Her nailpolish was chipped and she had no make up on. I had heard her husband had lost his job a few months back but I wasn’t sure if the gossip was true.

One thing that was true, however, was that she she didn’t have one dollar and forty cents to pay for the protractor.

I wanted to shout: Hell yeah. I wanted to jump up and down and say: That’s karma in action, you bitch. Instant karma right there. You and your husband are being paid back. In your face. In YOUR face. Let’s see how unimportant money is to you now.

So there was the karma, instant or otherwise, looking me square in the face and may all the spawn of the sweet goddess of revenge strike me down but I felt bad for her. I felt empathy for her state. After all the nasty things she’d done to me and I’d seen her do to others.

I was angry with myself because when someone I feel deserves it gets an almighty kick in the butt I want to sit back and enjoy it. Possibly with a cigarette and a cocktail. But I couldn’t. Because I’ve been there. I’ve been down there scrambing for every single cent. And I know how bad it feels and even though it made me mad to do so (because part of me wanted her to suffer) I felt empathy for her.

So I paid for the protractor.

And she hugged me. It was one of those weird please-don’t-touch-me-too-closely kind of hugs where you don’t really trust one another; kind of like the way you might hug Cruella De Ville when you know she still has one of the dalmatian puppies in her coat pocket.

I would never have expected this from you after everything…..her voice faded off. She couldn’t finish the sentence but it was enough for me.

I knew what she meant.

There are lots of instant things in life I like.

Mmmmm. I love me some instant porridge.

But instant karma. I don’t think I love it as much as I thought I would.

Yet if the instant karma makes someone who wasn’t able to think it before realise that money is important if it is earned with integrity and appreciated and used respectfully, then that is enough for me. More than enough.

Because I prefer instant porridge to instant karma anyway. 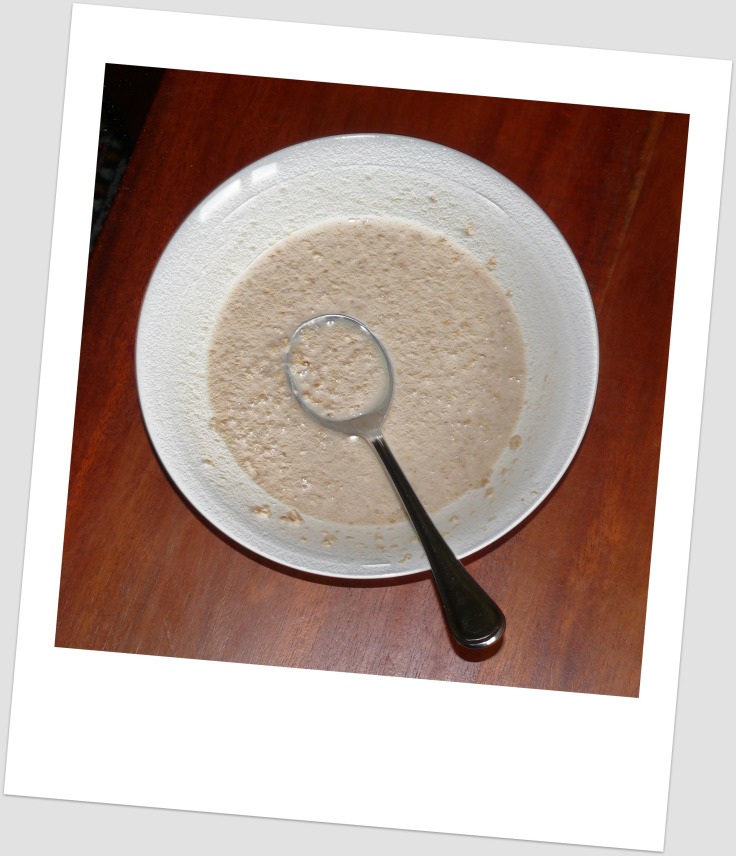 20 thoughts on “Why I Prefer Instant Porridge To Instant Karma”