Those of you who get public transport will know that it is often an interesting, colourful and sometimes educational experience.

Sydney buses are no exception.

I get the bus a lot because I hate driving into the city. It is completely congested, courier vans and delivery trucks are constantly trying to drive you off the road and hipsters (metrosexuals) in their buffed and gleaming Audi A6s are so busy looking at themselves in their rear view mirror or taking photos of themselves while driving with their Instagram App that they brake late causing the people behind them to become uncomfortably intimate with their windscreens.

Also there is nowhere to park. The cost of parking can range from ten dollars to over a hundred and who wants to fork out that?

No thank you, Ma’am.

So I get the bus. 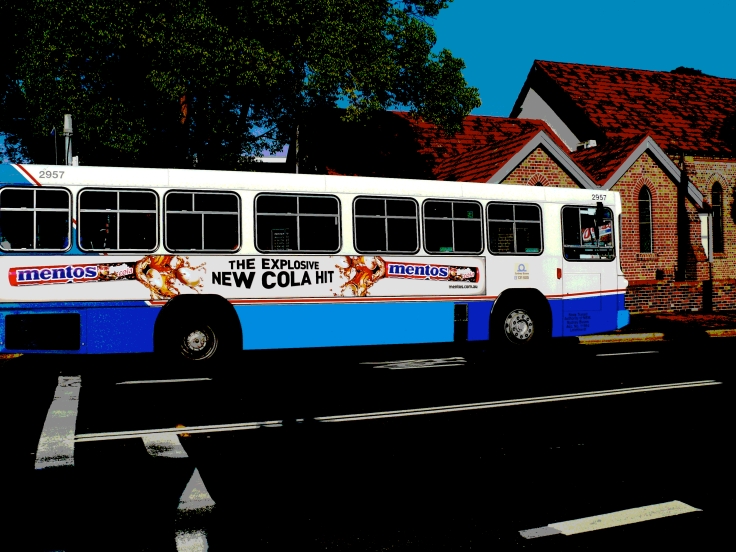 There are always lots of stories on my bus. I live in an area that spans a wide socioeconomic range of bus-going people – we have wealthy corporate types, arty types, boys who want to be gangsta, girls who want to be Rihanna, fretting Mums who worry their toddler is disturbing the other passengers by singing the ABC song twenty times in a row, anxiety-ridden Asian teenagers who are frightened they are going to miss their stop and keep asking the bus driver where they get off until he screams in frustration: ‘I’ll tell you where you can get off.’

My kind of bus driver.

My kind of bus route.

The other day was no exception.

It was a chilly, blustery Saturday morning. I was enjoying sitting up near the front of the bus, looking out the window at all the people in the streets in their trendy coats and brightly coloured scarves, listening to the two elderly ladies across the aisle from me discussing how Margie’s grandson Jono had got yet another girl pregnant and had shot through. ‘It’s disgusting,’ said one. ‘He can’t keep it in his pants. Randy bugger.’

‘They should cut it off’, said the other. ‘Cut it right off.’

I was in the middle of doing one of those choking, sneezing things where you are trying to stifle a laugh when a woman got on the bus and sat next to me. This woman had big hair. BIIIIIIGGGG hair. Jerseylicious, Jersey Shore BIIIGGGGG HAAIRRRRRR.

I don’t know what she had done but the parts of her hair that weren’t reaching for the sky were extremely  lustrous. I have never seen hair that shiny before; it was as if she had a spotlight trained on every silken tress. And those tresses loved to be swung through the air. She was talking on her mobile and kept flicking her hair, turning her head this way and that like she was in a shampoo commercial.

‘My boyfriend,’ she said as she ended the call. ‘He won’t leave me alone. It’s because I have a great imagination.’ She then proceeded to outline how great her imagination was.

‘You do that with that?’ I asked. I was beginning to think I was in the presence of not only someone with a great imagination but someone who took being limber to a new, previously unattained level. The woman must have been a professional contortionist. She nodded sagely, shrewdly, getting off at Chinatown.

A young guy got on. He was very pale, slightly green at the edges. He had that stale, musty smell people have who have slept in their clothes and drunk too much beer the night before. He kept clearing his throat and swallowing rapidly.

The guys sitting behind me latched onto the green guy straight away.

The green guy was carrying an umbrella. He began to cough, swallowing even more rapidly than before. He partially opened the umbrella which incongruously, was decorated with a jelly bean print. Very jolly. As the bus lurched up George Street he threw up into the umbrella. The jelly beans suddenly didn’t look as jolly. As the rest of the passengers retched and the guys behind me shouted: EPIC FAIL – I couldn’t help but be impressed by the accuracy of green guy’s aim and his resourcefulness at utilising the umbrella.

The busdriver pulled up nowhere near a bus stop.

Once again I was impressed. That busdriver really knew how to tell people where to get off.

My bus route never lets me down. Oh, how I love it. Colourful, interesting and educational all in one. I don’t think I’ll be taking the car any time soon.