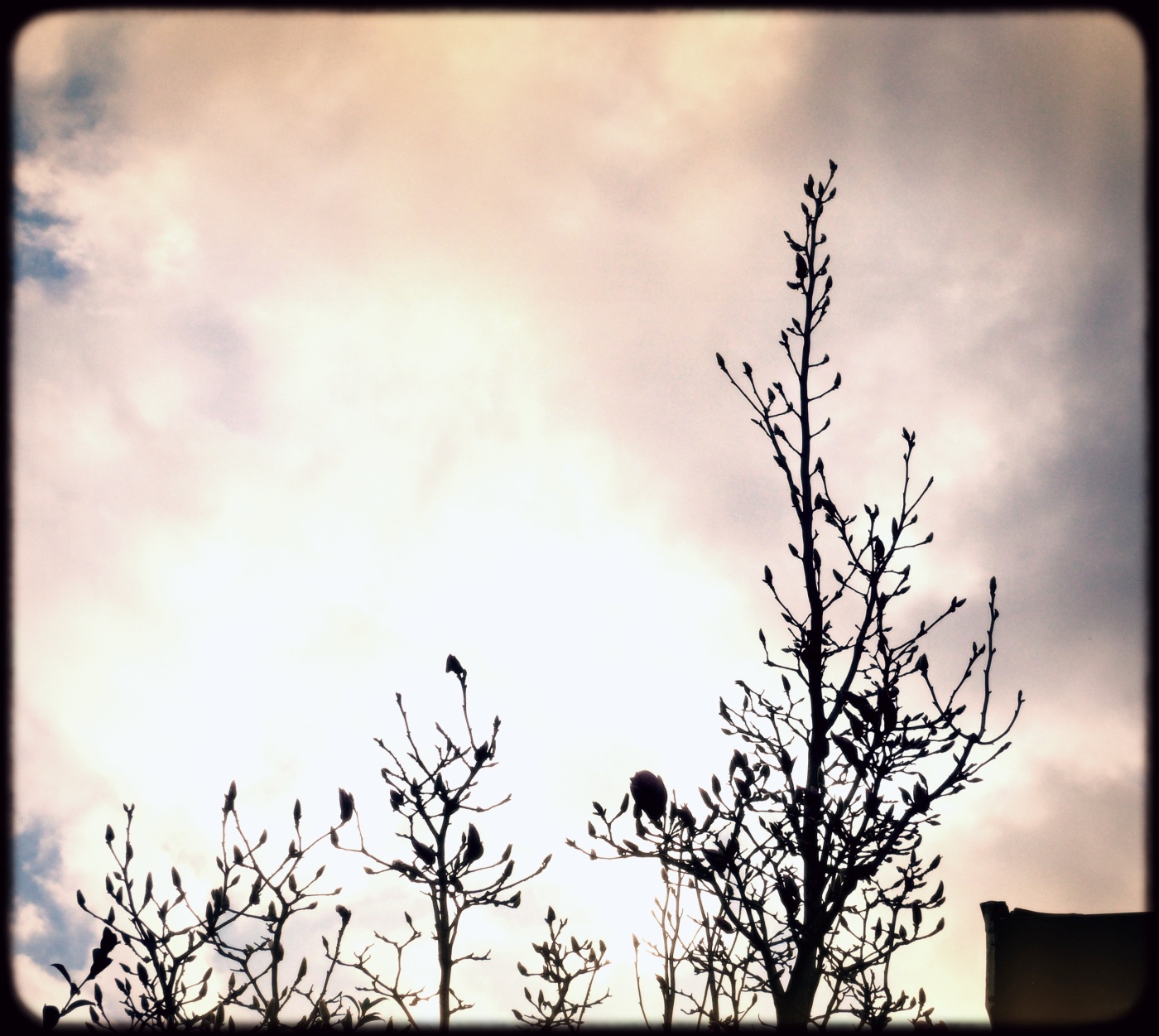 This evening was an evening reminiscent of autumn; where there is a chill in the air, the tiniest sliver of coldness, making you catch your breath. I don’t know where it came from, this breath like frost that ran across the ground because all day the colours in the air were vivid.  Shortly after noon I looked out the window and the sky was blue, freshly painted, free of clouds. I looked for over five minutes and couldn’t see a single band of white. Butterflies frolicked in an aerial display, little wings catching spots of sunlight. It was a day where hope swept as high as the sky.

Then little fingers began to crawl across the ground. Fingers that might have belonged to spirits of ice and snow. I felt a shiver run down my neck as I saw the twilight cling to the walls, muting the bright spring colours into muffled lilacs, yellows and greys.

I saw a woman in the street as I was getting the mail. She had on a coat also reminiscent of something else, another time, another place. 1960s London. A pea coat, double-breasted, navy blue, in Sydney in October.

I thought I was imagining her. I thought the ground-crawling fingers had conjured her up, but she nodded to me and I saw she was real. ‘It’s cold tonight,’ she said. ‘Colder than normal,’ I agreed. ‘Thought I’d air out the coat. I bought it on EBay.’

She spoke to me of things she had bought online, wins and rip-offs, and unexpectedly how she’d found a lorikeet dead in her garden, the saddest of all sights, like someone had taken a hatchet to a rainbow. She didn’t know what had happened to it, if a cat had got it or it had fallen from a tree; but she had been so overwhelmed by sorrow when she had seen it she just had to get out of the house.

I offered to go home with her, to move the dead bird, but she said her husband would do it. She spoke to me of his kindness, his capacity for empathy and how lucky she was. But she also spoke to me of her capacity for sadness, for loneliness even in a room full of people.

I told her we all feel that way from time to time. I told her that sadness warms my skin as a much as happiness does and she gasped, nodding her head.

‘The trees are dark against the sky,’ she said. ‘Their buds are baby fists curled against the night.’

I smiled then as I always do when people take note of beauty and poetry that is right in front of them. As those cold, creeping fingers pulled the night towards us, the woman in the pea coat gathered her collar against her and left. ‘Take care, angel,’ she said, meaning it.

I listened as she walked away, her shoes crunching on the gumnuts scattered by wind and the kids climbing like cats; transfixed, spellbound.

31 thoughts on “The Woman In The Pea Coat”