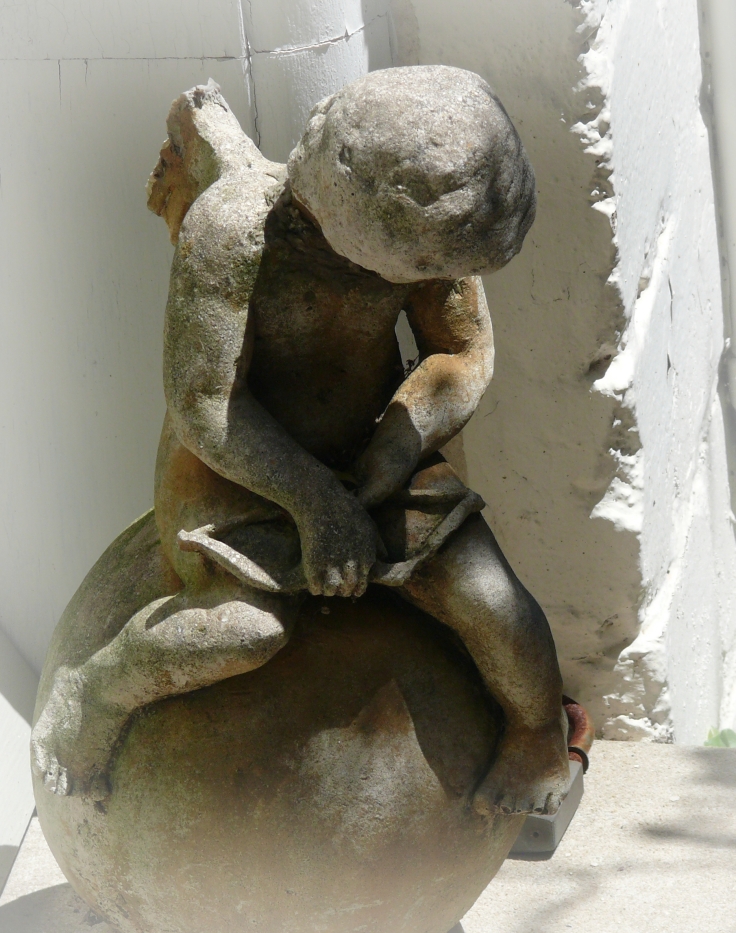 It all started with an angel with broken wings. I found her in the lane, discarded, her wings snapped by the weather or maybe eroded away by time; obviously no longer wanted without them.

It seemed fitting that she would sit in the sun by the side door, catching rays, shaded by wisteria. She looked like she had sat there for years.

I don’t know if her broken wings were letting loose bursts of angelic power but the week that I took her home seemed to unleash forces which were a little frenetic and darker than I might have liked. It was a bad week, a sad week, a mad week where you think it is entirely possible a mirror has been broken without you noticing – a big mirror, antique, with a gilt-edged frame, heavy as a castle door – throwing all that bad luck out into the universe. Seven years worth.

About two weeks ago I found a baby possum abandoned in the park. His mother was dead on the road. I cried a bit and then noticed he was looking at me with his wide, saucer eyes, imploring, defenceless. Peep, he said as if asking for help. Peep.

I called the wildlife rescue service and they came to get him saying they would get him checked out and make sure he had enough to eat. However, a week later my friend, Gina, said she was sure she’d seen him back in the park, skinny and alone.

And there he was.

So Gina and I kept an eye on him, making sure he had enough to eat and that he wasn’t being bothered by cats or kids. It was all going well until that Friday night I fell off the wall. A stormy night, a cold night where the lightning hit the side door of my house with a crack. A crack big enough to break off an angel’s wings.

It had been a really bad week, a really stressful week and as the rain fell I became convinced something had happened to my little possum whom Gina and I had named Peepo. I just couldn’t shake the feeling he was starving or scared or worse – a tree branch fallen on him and crushing his little fluffy neck.

So I went out in the rain and the wind and the lightning to look for him. I couldn’t find him. I couldn’t see him among the shadowy branches of his favourite fig tree. So I stood on the wall that borders the park to get a better look. And the rain fell harder. And the wind lashed. And the lightning thrust itself through the sky. And I thought to myself : Is it wise to be standing on a stone wall in an electrical storm? And I didn’t notice the wall was crumbling onto the pavement below. And I fell off.

In hospital I thought about the angel a lot. How I found her, grew fond of her and in a strange way grew like her. Broken in different ways, but broken nonetheless.

It helped. To think of her. Her snapped off wings keeping her earthbound. She was broken, but in an inexplicable way still whole. Just like me. Just like all of us. Vulnerable, yet strong.