A lot of people I know are talking about Gina Rinehart’s shaking up of Fairfax Media.

Readers who don’t live in Australia (and I thank you all so much for reading…) may not know about Gina Rinehart so I’ll give you a little bit of a heads up. Bullet points are required, I’m afraid –

Her personal net worth is estimated to be close to AUD $30 billion and she increases her wealth by a million dollars every thirty minutes. Amazing stats.

Usually I don’t spend much time thinking about Gina Rinehart. Her lifestyle, her persona, are so foreign to me she might as well be a fictional character.

But yesterday, Gabrielle left a comment on Twitter that stayed with me all night and I couldn’t stop thinking about Gina Rinehart and her love of money.

Gina Rinehart’s life is not exactly a fairytale. It would seem her children pretty much despise her (typical poor-little-rich-kids-trust-fund-dispute), her feud with stepmother Rose Porteous is legendary, and she recently pissed off a lot of Australians by importing over 1700 migrant workers to build her new iron ore mine in Western Australia (without the say so of our Prime Minister.)

The headline in today’s The Australian describes her as rich, ruthless and the ruler of a bitter house divided.

30 billion dollars seems like more of a nightmare than a blessing, if you ask me.

Can you get that much money and still be a decent person?

Does the getting of 30 billion mean you have to leave your sense of philanthropy and compassion for humanity at the door? For good? What about your sense of self? Who you are? Do you ever just have a  good laugh or sit with your fingers crossed, praying your favourite doesn’t go home on the elimination round of Masterchef?

Normal things. Little things that require no money. Do you lose them when there is a 30 billion dollar price tag on your head?

I was talking to some friends about it and we all agreed that living the life Gina Rinehart does is for the most part unenviable. It would be stressful. You wouldn’t know who to trust. So many people (including the press and politicians) would be out to get you day in, day out.

The philosophical question is are you as spiritually poor with 30 billion as you are with thirty cents? It’s an interesting thing to think about.

Putting up with all that nonsense all day, every day where your motivations are to get more money, more power, gathering it all up before you again and again until your arms are full, until you are crushed beneath the weight of it,until you feel like you are the most powerful person in the world, that no one matters as much as you do; acquiring more and more and more so that your brain is bursting, until your skin is splitting as if you have found yourself in a scene from a Roald Dahl book, until you have no choice but to spontaneously combust……… KERSPLAAAAAAT – it must be a form of masochism. It has to be. As damaging as people who punish themselves for failure.

The nature of money…. I don’t think I’ll ever understand it. It’s a dangerous, insidious thing. Large amounts of it should be kept under glass or in a lead-lined vault; away from us, underlit and dingy so it looks ugly and unappealing. So it doesn’t make us love it more than ourselves or each other.

I’ve done a lot of pondering here. Too deep for a Wednesday afternoon. So it must be time for a bit of fun courtesy of http://www.danilic.com (unlinked for security purposes)

Perhaps this is the future for the Sydney Morning Herald under Gina Rinehart. 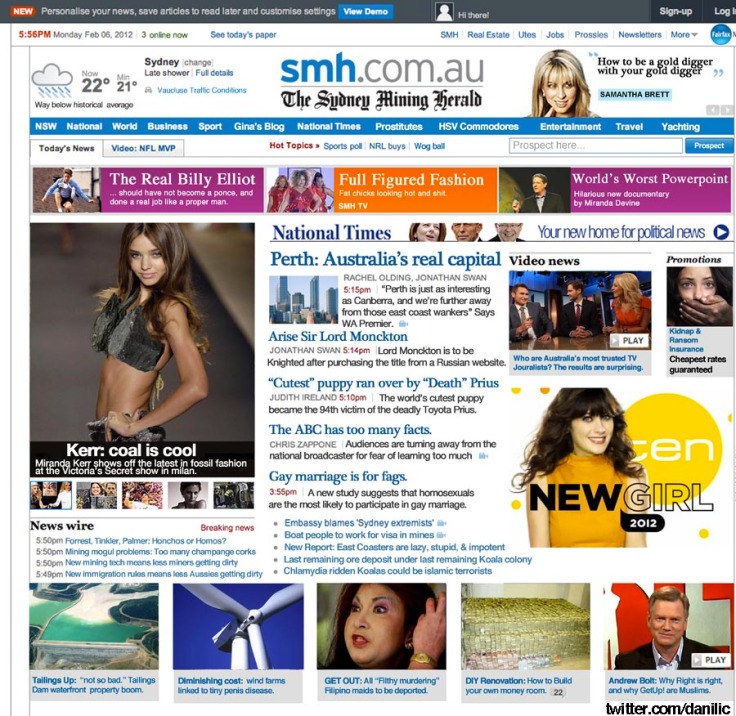 30 thoughts on “For The Love Of Money”