There have been moments in my life where I have been in the wrong place at the wrong time. One of those moments was when my Great Aunt Nellie died in the early ’80s. I was still at school and couldn’t afford the fare all the way to Ireland for the funeral.

Great swathes of colour covered her canvases – vibrant, vivid as any colour you see in nature when you look out the window. There was a feeling of wildness, of abandon and of joy to her work. It was as if what she saw and felt was immediately captured and spread across the canvas, that one moment as it was, unrestrained, perhaps a little riotous, definitely undomesticated.

I say undomesticated because Great Aunt Nellie painted at a time when women in her sphere did not make a living from the arts. Rural Ireland in the 1950s was an incredibly patriarchal society and fathers with four unmarried daughters were unsupportive of any of their children who looked to be engaging in activities deemed self-indulgent and a waste of time. So Aunt Nellie worked in a button factory, making thousands of mother-of-pearl buttons every week for the silk blouses of rich ladies, continuing her painting in secret.

I liked that about her – her drive to create no matter what, her rebelliousness – it really appealed to me. I liked it as much as I liked her paintings.

Great Aunt Nellie was stuck in the factory six days a week and didn’t have much time to get out and find subjects to paint. She walked two miles home every day in the early evening. That’s when she began painting sunsets – when she got out into the wide world at the end of the day after the confinement of the factory, sunsets were all she saw.

I don’t know how many she had all up but when I visited her when I was 15 she showed me over 200 of them. Oranges, pinks, blues, yellows, blending together in a resplendent celebration of colour. Those sunsets were just about the most glorious things I’ve ever seen.

When Great Aunt Nellie died much of her work was found mouldering away in a gaerden shed. She had given up on painting by the time she reached 87 years. As far as I know most of her paintings were thrown away. That’s why I talk about being in the wrong place at the wrong time because if I had been in Ireland at the time I am sure I could have salvaged some of those paintings. Somehow.

I asked Great Aunt Nellie once why she painted so many sunsets. “Sunsets are full of hope because they’re beginnings, not endings,” she said. “They mean the day is having a rest, ready to start all over again in the morning.”

In the spirit of great Aunt Nellie I have begun collecting sunsets. The colours start slowly, whispers on violas in a string ensemble. Lines of pinks and the softest of oranges. Mauve creeps in too. 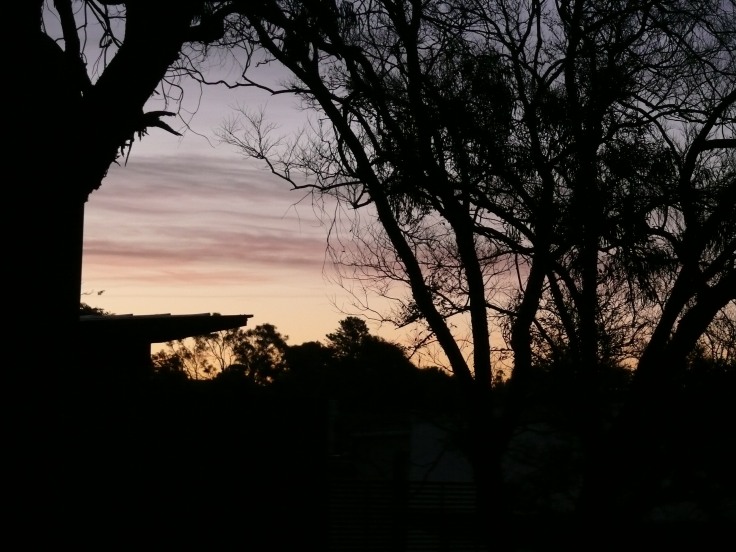 The trees and streetscapes are thrown into silhouette as the sunset grows into bold oranges and reds. The rest of the landscape is almost rendered insignificant by the sublime sunset splendour. 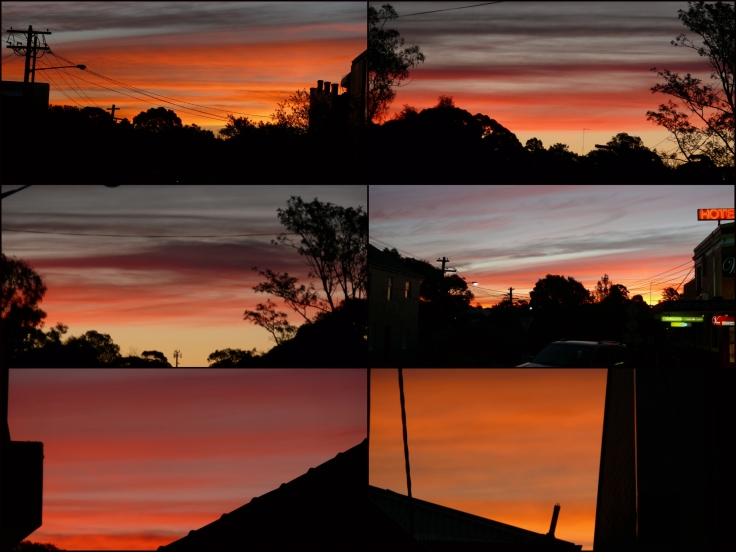 The sunset pulls you in, comforting as a scarf warmed before the fire, wrapping you softly in its triumphant verve; undisputably a beginning, not an ending. Just like Great Aunt Nellie’s paintings.

37 thoughts on “Sunsets And Other Beginnings”