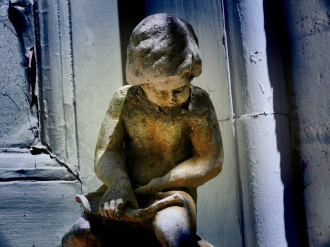 I found this stone angel on the street a few years back. Her little wings had snapped off and she had been dumped in the lane way. She looked desolate when I found her, downcast, abject. She quickly became a metaphor for my life at the time. I kept her by the door leading to the garden, smiling whenever I saw the sun catch her head or butterflies fly close enough to touch her. She became a symbol of tenacity and resilience. She still is.

Three years and two houses later, my stone angel still sits in the sun and watches for butterflies. Her wings remain lost but still she goes on. We are more alike than ever, my angel and I.

I haven’t written here for two years. It staggers me when I think about it.  TWO WHOLE YEARS. Two years that seem to be lost. I wonder if all my observations, ideas and readers are lost too –  just like the angel’s wings.

My marriage ended. A man I loved for 27 years betrayed me. The reasons are irrelevant now but the sting of the betrayal lingers around the back of my neck and shoulders. I can’t shake it off. It is a noose pulling me backwards, tugging. When you trust someone absolutely and they betray you – that is worse than a knife in the chest. You hate them, you hate the world, you hate yourself. You hate everything so much that the noose tightens and tightens and tightens and your wings snap right off.

For a long time I couldn’t fly even If I had the power to. I couldn’t even look up at the sky to see the sights I love so well. The ground was all I wanted. The cracks in the footpath. Leaves crushed underfoot. Bugs making a break for the bushes, rubbish lodged in the gutter by the backwash from traffic. It fed my misery, this ground dwelling. It was ugly but comfortable. Part of me liked it even though most of me shied away from it.

I wanted to look at the sky so badly. I could feel the sun on my hands and head but I didn’t dare turn my eyes towards it. I wanted to punish myself for being betrayed, I wanted to tie myself to the dark because surely if someone I knew and loved so well could betray me like that I deserved it. It was the only reason I could think of.

Having to do things saved me from the dark.

That act of betrayal nearly killed me but at the same time it gave me back something that had been lost for years. As the sky loomed closer and closer I saw it –  small as as boat on the horizon at first – then larger and larger standing right in front of me. I would have shaken its hand if I could. It had been lost for so long, I had missed it, dull and fingermarked, held captive by the needs of another; but there it was shining and beckoning just like it used to, on its way to being fully restored – my sense of self. In losing one thing we often get back another. I now know that to be the truth.

On sunny days my angel and I sit, still wingless but not unable to soar. The sky is no longer out of our reach. We see it. We know it. No longer bound to where our feet fall we gaze, breaking free from the asphalt, looking up to the light.